Behrends and Marvel's X-Men: The Place that Graced the Silver Screen

If you are a fan of the X-Men franchise of comic books and films, you know that with the release of X-Men:The Apocalypse and Deadpool this year, as well as two more films planned for release in 2017, the interest and love of the series is only increasing. What you might not know is that Behrends Group contributed to the making of the first film back in 2000 by creating the plaque that adorned the wall of Xavier’s School for Gifted Youngsters.

According to the films, the Xavier School was founded by Professor Charles Xavier for the purposes of training young mutants to control their powers as well as normalizing their presence in the human world. The main spirit behind the school was the safeguarding of innocent mutants from human oppression and to create an atmosphere conducive to peaceful coexistence.

The plaque was commissioned by Springwood Productions – the organization responsible for the making of the film. Two prototypical plaques were created with different finishes as the production company was unsure of which one would end up as the final prop for the film. Any quick search will yield images of the plaque chosen to appear in the film, and while many companies have claimed that they can make similar replicas of it, only Behrends produced the original.

In fact, Behrends still owns the original polymer used to create the plaque mould and the original drawings used when creating the design. The plaque has become an icon of the X-Men franchise, particularly as it helped start off the series and receives a prominent space in the first film. Anyone familiar with the quality and style of traditional bronze plaques from Behrends Group recognizes the work and craftsmanship of our foundry immediately. Behrends Group is proud to have played a small part in this cinematic legacy. 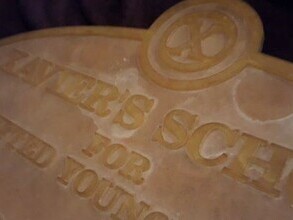 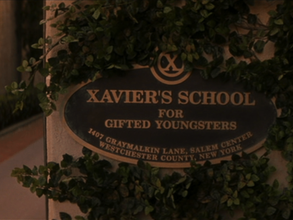