A Lifetime of Leadership and Service: Plaque and park unveiled in honour of Metis businessman and philanthropist Herb Belcourt

On May 10, Herb Belcourt Park was unveiled at Sherwood Drive and Oak Street in Sherwood Park. The park is named in honour of local businessman, community leader, and philanthropist Herb Belcourt. Belcourt is a founder of Belcourt Construction, Canative Housing Corporation and the Belcourt Brosseau Metis Award Fund, which supports Metis students furthering their education. To honour Belcourt’s years of service and contributions to the community, Sherwood Park and Strathcona County commissioned a plaque from Behrends to adorn the newly renamed park.

The cast aluminum plaque is mounted on a stone fixture and features an image of Herb with his two young great-grandsons, Liam and Jackson. The detailed and lifelike rendering of Belcourt and his great-grandsons was achieved using PhotoSculpt – a technology that allows us to translate photographs into cast metal. This combining of a traditional medium and craftsmanship with cutting edge technology to produce a timeless memorial exemplifies the quality work Behrends is known for.

The unveiling was attended by Herb Belcourt, his wife Lesley, family, friends, and supporters including representatives from the Alberta RCMP and the Edmonton Police Service who paid their respects to Belcourt for his service as Aboriginal Advisor to the Commanding Officer at “K” Division of the RCMP.  Belcourt also recently received the Canadian Council for Aboriginal Business Hall of Fame Lifetime Achievement Award in January 2017. 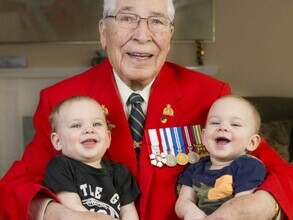 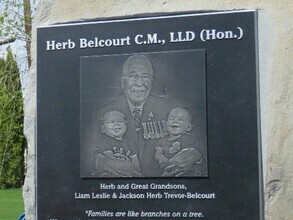